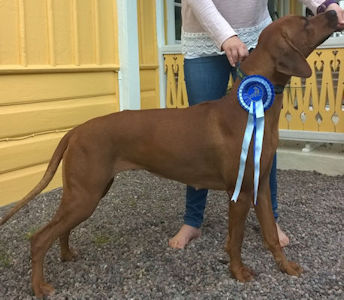 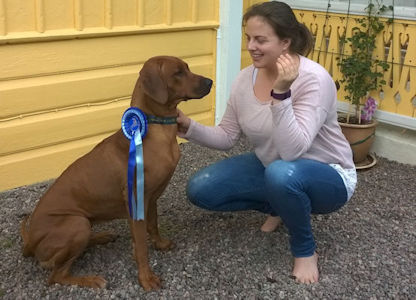 Torasbo’s Jekesai/Ici was born in Unathi’s first litter. She is typical of that litter: Full of life, energy and curiosity. She is very social and follow her nose at every moment. She has been shown twice and was awarded BIR Puppy in September 2015 at the SRRS Special in Skåne. She was recently shown after the World Rhodesian Ridgeback Conference in Lund. In spite of her inexperience she was awarded 2:nd prize in young dog class with CK= champion quality. She has followed in her mother’s footsteps with her great enthusiasm for tracking and after game tracking course this spring she will try for the aptitude test in the fall. She has also tried Nosework and Agility with great eagerness. If all goes well she will be our next breeding bitch.